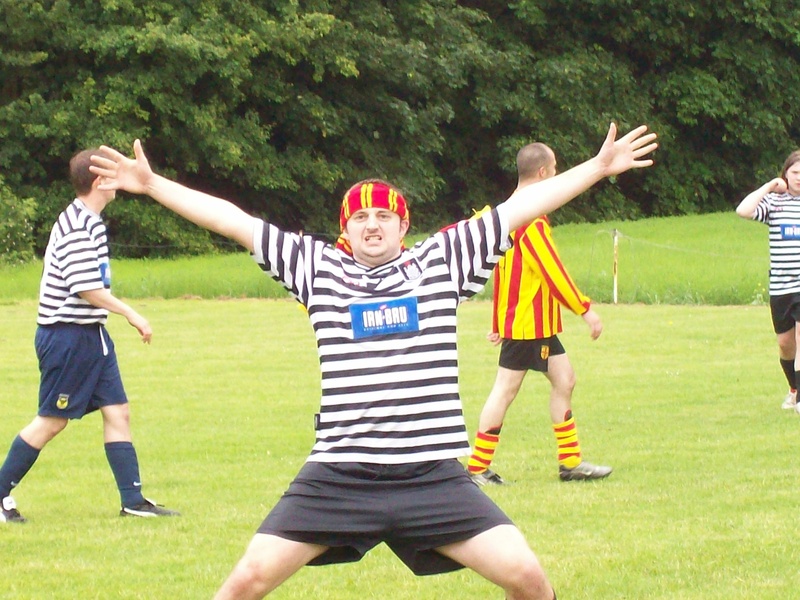 June 2010 saw a historic moment for the Club as we were invited to an overseas tournament for the first time.

The tournament was taking place in Namur in Belgium and we were invited due to our recent relationship with the Belgian branch of Paris St.Germain.

It was a seven a side tournament and our historic seven who travelled to Belgium were:- John Crosbie, Arthur McCue, Paul Joyce, David McLean, Calum Colquhoun, Danny McFarlane and David Blair.

The Friday night's entertainment took place in Le Piano Bar in Namur and a good night was had by all.

The Saturday saw the tournament take place at Andoy just outside Namur and there were meant to be twelve teams taking part.

However, four teams dropped out so we were left with four teams in each group.

With Dave The Ex-Barman carrying an injury he went in goals for the first game and we lost 6-0 to JK Jalgpalihaigla from Estonia.

Dave dropped out due to injury so we borrowed some of the Namur/PSG guys to help us out and lost our next game 3-1 to old friends Oxford with Crossers scoring our first goal on foreign soil.

The last group game saw us victorious 2-1 against Royal Antwerp, Paul and LHD scoring, but unfortunately the result was given as a win for Antwerp so we ended up in the 7th and 8th place play off.

This game was against KV Mechelen and we lost 4-2 with Paul and James Longshanks from Oxford scoring for us.

The eventual winners were the local Namur side with the Wooden Spoon coming our way with even Dulwich Hamlet finishing above us !

After the presentations it was back to Le Piano Bar and another good night ensued.

Another Sunday sightseeing then a night on the town to round off a superb weekend.

A big thanks to Nicolas who had to take over the running of the tournament after a few technical difficulties and he did well to sort everything out on the day.

Well done to our squad as we conquered Europe for the first time and let's hope it's the first of many trips abroad.

[More photos in the Photo Gallery]