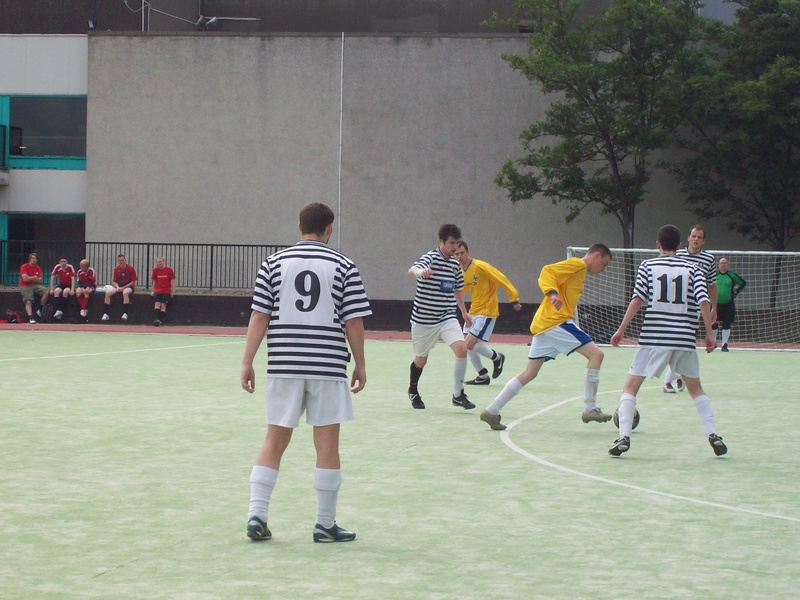 The second Scotspurs Sevens took place on the all weather pitch at Meadowbank Stadium.

This was our third small sided tournament in June and the third time that teams had failed to turn up with Appin calling off on the morning of the tournament.

This left five teams in the competition and therefore each team would play each other in a group format.

As the World Cup last sixteen game between Germany and England was on at 3pm it was decided to try and get the football played in a couple of hours so we could all watch the game in a local pub, Jock's Lodge.

With four games to be played it was great to see that we had a squad of nine travelling to the Capital as well as injured "stars" Danny and Short Haired Dave.

The first game was against the favourites PSJ and we lost 4-0.

Next up was the hosts Scotspurs and we got our first victory of the day as we won 2-1 with two goals from Craig.

Our momentum had picked up and Edinburgh Saints were put to the sword 4-1 with Andy D and Craig both netting twice.

Our last game was against old friends Ormond Saints and we saved our best for last with an excellent all round performance as we ran out 6-1 winner. Sean and Craig both netted hat tricks.

With the tournament over it was time to head to Jock's Lodge to watch an enjoyable World Cup match with the pub seemingly full of Germans.

After the TV game the presentations took place and PSJ were the winners of the Sevens but we finished in second place, only missing out on the trophy on goal difference.

A great effort from the team and we got better as the tournament went on and looked a good outfit by the end.

Some of the squad spent a wee while in the Capital before heading home and it was a late one for some people.

Thanks to Steve Oliver of Scotspurs for organising the Sevens and keeping in good spirits despite his national team dying a death in South Africa.

[More photos can be found in the Photo Gallery]